Local eGovernment in Italy – a Report 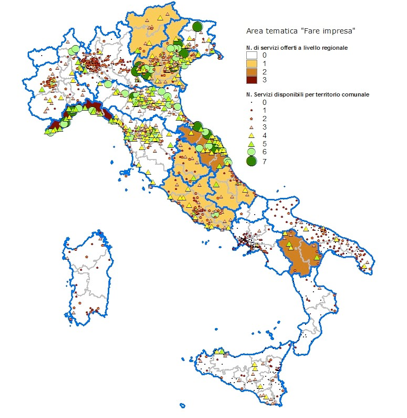 This report has been presented at ForumPA conference in Rome on 13th May 2009. The research is carried out by the staff of the Regional Centers for eGov at CNIPA and funded by Italian Presidency of the Council, Innovation and Technology Dept. The results of the survey show that there is still much to be done in order to achieve full availability of local public eServices in Italy.

On average, 11.1 out of 43 services included in the survey are actually available to citizens and enterprises in the 1,112 municipal territories with more than 10,000 inhabitants (25.6%).
Only 37% of the services analyzed can be considered real transactions (full electronic case handling), while most of them are merely downloadable forms. This result certainly stresses how difficult is for local P.A. to provide efficient services on line. However that might also reflect the actual behavior of the final user, who might be just looking for information and not requesting the implementation of costly transactional platforms.
Previous studies have shown that interactivity of eServices should not be measured using discrete stages, since it does not really reflect a linear progression from information to transaction. This survey, which detects the simultaneous presence of 10 attributes of the service, helps to assess the overall quality, reflecting the true functioning and usage of each single service. In particular, new dimensions of interactivity are considered, such as the presence of public accessible on line databases (i.e. public libraries catalogues).

The survey adopted a user-centered approach in its search for eServices. All public and private websites were surveyed in order to find and analyze the 43 local on line services included in the sample. A significant share of eServices is offered through websites not directly managed by local institutions often considered in previous surveys such as Regional, Provincial and Municipal Administrations. The variety of eServices available might disorient the final users, thereby jeopardizing the web credibility of public websites.
The role of institutional websites of the Italian municipalities – the closest institutions to the final users – is considered crucial by local and national policy makers in order to include the largest possible number of citizens in the development of the Information Society. The data shows that the institutional websites of the municipalities no longer represent the main channel for providing municipal service

s via the web. Many other local websites have taken their place: 60% of the transactional on line services analyzed are offered by the websites of other public and private organizations such as companies for tax collection, shared offices dedicated to enterprises, portals of e-government projects, regional portals.

If the actual availability of the services is considered from a user-centered point of view, it becomes evident that those municipal eServices offered in an “aggregated” way – through a single website but directly available to individuals and enterprises operating in more than one municipal territory – show a much higher impact than the solutions developed by individual municipalities. This impact is estimated to be, on average, from 5 times higher for e-government proje

cts websites to 50 times higher in the case of portals handled by Regional Administrations. This result underlines the well known need to avoid duplication, i.e. for the development of similar solutions in similar territorial contexts (there are more than 8,100 municipalities); this drives the requirement for more coordinated actions at Regional and National level.

As a consequence, the services that demonstrate a higher level of availability are regional or provincial services (i.e. job related) or are municipal services provided in an “aggregated” way (i.e. local tax payment).

The number of available services per municipal territory varies from 0 to almost 20 services out of 43, with an average of 11.1. The presence of a large number of territories with few or no available services proves that the implementation of local e-government in Italy is still far from complete.
The report analyses some of the determinants of this digital divide in eServices provision.
• The size of the resident population in the municipal territories does not dramatically influence the number of available services. Even though a correlation exists, the survey found the presence of a number of isolated cases of high performing territories among small or medium-sized municipalities.
• The level of financial independence of the Municipal Administration, since a more autonomous financial regime tends to increase the willingness to invest in innovation, also affects eServices provision.
• Finally, the participation in e-government projects co-funded by the National Government from 2002 to 2007 has undoubtedly helped Local Administration to foster public services provision via the web. Further research is needed to evaluate not only the effectiveness of the connection of those front office platforms to back office processes, but also the long-term financial sustainability of the projects together with the actual take-up and user satisfaction.

There is considerable variation in the quality of eServices provision among the municipal territories of the Italian regions. This variation is mainly due to the ability of each Regional Administrations to offer its services on line and to involve and coordinate the other local institutions in shared projects.
Italian Regions also present different models for eServices provision. In some Regions (such as Campania, Emilia-Romagna, Molise and Calabria) the prevailing type of provider is the institutional website of the Municipalities, while in other Regions (such as Liguria, Abruzzo, Basilicata, Marche) the services are offered predominantly at Regional level. The survey revealed that in three regions – namely Abruzzo, Marche and Sardinia – e-government shared portals played a major role in the provision of on line services, largely as a result of the co-funded projects in the 2002-2007 period.